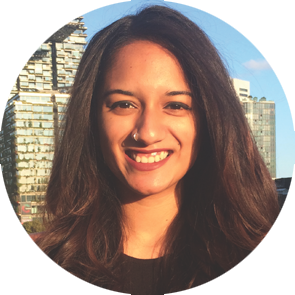 “So many people are just at university to study but if you develop a supportive network and friendships, you soon realise that we can all be happy in each other’s success and it’s not such a dog-eat-dog world,” she says. “Survive Law does just that – we are there for everyone who needs us.”

The Survive Law website has 500,000 visits from Australian law students annually. Started in 2009 by UTS Law alumna Wenee Yap, the site is Australia’s only daily law student publication, providing support, information and wise practical advice – a lifeboat to get students through law school.

Back in year 12, Maddula put UTS Law first as her university preference. “The main reason I wanted to come here was that UTS offered a practical education,” she says. “I think that the skills I have learned at UTS will really help me whatever career I do.”

Last April (2016), Maddula took her law skills internationally, as part of a four-student UTS team that travelled to Oxford University in the UK, to participate in the Monroe E. Price International Media Law Moot. UTS was the only Australian university to make the semi-finals and placed second runner up overall.

“It was an amazing learning opportunity. The calibre of my teammates as well as the competitors and judges was incredibly high. It really pushed me to be a better researcher, speaker, and law student,” Maddula says.

As far as her own career goes, Maddula aspires to work in commercial law and continue her involvement with start-ups – she’s already been involved with Yap in setting up Sydney’s first cat cafe, Catmosphere, in Surry Hills.

During her recent summer clerkship at Gilbert +Tobin, Maddula also gleaned some valuable lessons. “I am interested in start-ups, which is part of the reason I wanted to work for them; they have a reputation for being innovative in a traditionally conservative industry,” she says. “ I got to see that creative thinking really is a part of legal work and an increasing number of firms not only value it but prioritise it.”